Cheer Up You Buggers!

Just knocked this out and coloured it up. It's like some kind of social commentary, because if nothing else I'm a man of the people. So don't worry about not owning a house, bird flu, the 2012 aliens, melting ice caps, zombies, plague of frogs, wars and crazy weather. Things can only get better and there's no sign of it getting dark at 5 o'clock. Well apart from the grey rainy vista - but you know what I mean.
Posted by Phil Corbett at 16:53 No comments:

Email ThisBlogThis!Share to TwitterShare to FacebookShare to Pinterest
Labels: armageddon

I was out in Matlock yesterday and came across this massive pond in a fantastic moss garden. It was absolutely teaming with tadpoles. Here they are. I' can only apologise for the lack of interest in this update, but it was quite sunny yesterday, the clocks changed, I saw these taddies and I was excited that it was British Summer Time. Happy Days!
Posted by Phil Corbett at 12:39 No comments:

Email ThisBlogThis!Share to TwitterShare to FacebookShare to Pinterest
Labels: tadpoles 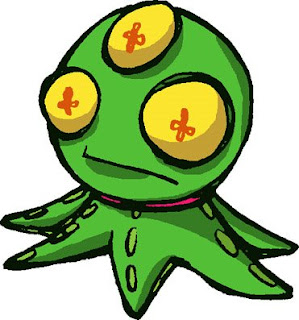 Crikey, keeping this blog going is harder than I thought and I'm not even a week in. Well I did a little doodle while I was on the phone earlier. Just coloured it up and slapped it here. Here it is. I think this counts as an update.
Posted by Phil Corbett at 13:06 No comments:

Email ThisBlogThis!Share to TwitterShare to FacebookShare to Pinterest
Labels: octopus 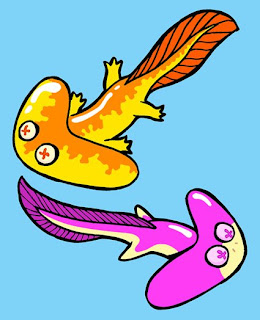 I really am becoming obsessed with the diplocaulus. I can't stop thinking about them. I think it's their boomerang heads. Or the fact that their eyes are so far from their mouths. In real life I don't think they had fins, they looked more newty, but I am a big fan of that style of tail. I'm sure I'm 100% correct in the way their pupils looked however and until I see fossilised eyeball evidence to the contrary I'm standing by that.
Posted by Phil Corbett at 12:22 No comments: 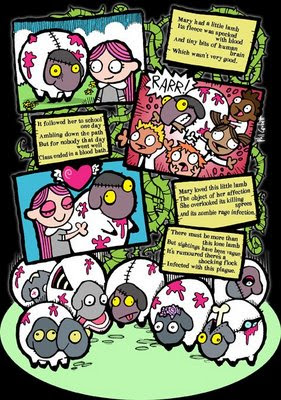 A little Shock Flock outing. I do like the zombie sheep idea - one day I hope to do more with them. One day....
Posted by Phil Corbett at 08:25 No comments: 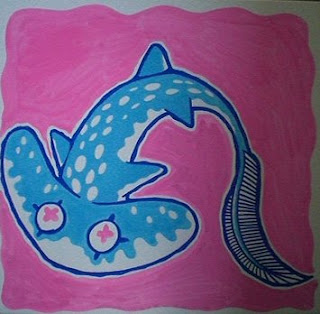 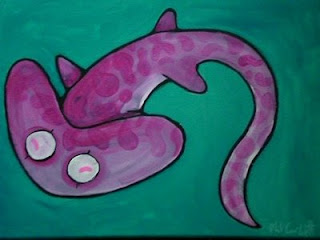 My parents' used to have a little pond at the bottom of their garden but they filled it in with little boulders when they had grand children as they were told that it would kill anyone who dared toddle in a five foot radius of it by some aggressive telly show . It was OK for us when we were kids, but those were different times. My mum even put down a patio slab under the swing to stop the grass getting worn away rather than protect our childish skulls from cracking if we fell off when my siblings and I were kids. To her credit, she still stands by this attitude of tidiness before common sense and practicality which results in many a heated debate on household management between us.
Despite all the rocks in the pond the frogs still get in and leave their eggs in the pond year after year. For some reason, maybe another question of aesthetics I discovered a bucket of frogspawn in the garage which had been removed from the pond. Mum told me she was going to take them to the pond in the park - which seemed a bizarre notion. On one hand why would you not want pest eating frogs in the garden and secondly the pond in the park is a froggy version of an Hieronymus Bosch landscape. Bleak and littered with rubbish, it's not a place for a frog to spend it's formative years.
Well the spawn is safely back in the garden pond and I've even bought them some fronds of oxgenating weed so these chaps owe me big time. Hopefully, when they're older the'll form a biblical plague swarm for me to command and smite my enemies with. Let's hope they remember the fate I saved them from.
All this froggy fun is coinciding with my current obsession with diplocaulus. This boomerang headed creature was an ancient prehistoric amphibian and I feel a Prehistoric Erotic Terrors of the Deep show coming on.....
Posted by Phil Corbett at 17:43 No comments:

Kids & Adults Love It So

The character is king there and after a couple of days I was seeing faces everywhere. In the buildings, in the sky, on human heads and even on sweeties. Check out these Haribos. They call themselves Smiling-Balla. The Pico Ballas are my fave of the Haribo family and this was just the icing on the cake. I like their little jelly babies too - although slightly resent them for pushing aside good old British sweets.
Posted by Phil Corbett at 21:40 No comments: 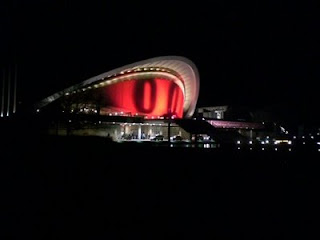 Last weekend I went to Pictopia which is the character design conference in Berlin. Look at what they did to the building it was held in, The Culture House (think it was Das Kulture Haus in German but I haven't got time to look that up and confirm it - although the time it has taken to type in this excuse I could have with ease).
Posted by Phil Corbett at 21:34 No comments: 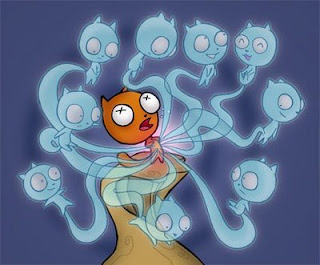 Well it's the last week of British Winter Time and clocks will change for the glories of long Summer evenings in a matter of days, so what better time to start blogging.
I'm thinking that the aim of this blog will be to show bits and bobs of what I do as a top flight illustrator and also to tempt movers and shakers to give me commissions when they see my brilliant pictures and fantastic writing style. What can possibly go wrong?
I need to see how to upload pictures so I'll start with my old fave with the cat losing all of its nine lives in one freakish accident.
Well that little experiment only proved that I can only put a picture at the top. I'm sure that can be changed but until then it'll have to do. Stick with me and give me a chance. This can only get better!
Posted by Phil Corbett at 08:30 No comments: