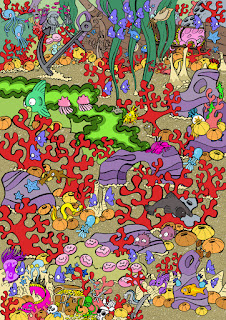 This was a commission for a complicated sea scene. The commissioner vanished without a trace but it was through an agency so at least I got paid - half of it. Ho hum....
Posted by Phil Corbett at 17:32 No comments:

Almost 75 years of the Dandy 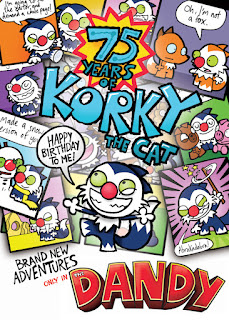 Rumours are rife about the closure of the Dandy. I've just heard it mentioned on 6 Music news, so it must be serious. Looks like it's about to come to an end just shy of it's 75th birthday. This is such as shame but, to be honest something that doesn't really surprise me. It's been an honour to write and draw their original flagship character, Korky the Cat for the last 10 years.

The latest Dandy incarnation has been around since October 2010 where it had relaunched as a more traditional comic rather than the magazine it had become. It was a great read but you really had to want it if you were going to find it. It seemed to suffer from distribution issues and terrible marketing and PR, relying on nostalgic readers rather than pushing the new comic. I love comics but even I draw the line of reading/buying vintage comic strips. They were good at the time but reading them now as an adult they seem a little lack lustre and very much of their time.

I dread to think of the future of the Dandy as just a bunch of licensed images on trite merchandise appealing to the retro giftware world. I fear that's it's future though. How can it hope to compete against TV and merchandised brand comics when it won't help itself. Many times I've offered to help with the Dandy's minimal website and help with marketing ideas only to be told that the Dandy editorial team didn't want to treat on the toes of the DC Thomson marketing team. They've obviously done a stirling job. When I mentioned to anyone they instantly about this British institution but were amazed to know it was still going.

So I suppose it's down to you to hunt down the comic and buy every issue you can and prove there is a place for it. Where's that Team GB spirit? We have the oldest continually published comic in the world here in the UK, beating even America (quite probably). Embrace the spirit of the innovative opening ceremony that represented the originality and brilliance of this country rather than the Pop Idol, CD on repeat closing party. Although, now I've written that it's suddenly become clear why the place for a free thinking, funny for the sake of it comic could struggle finding a place in the homogenised high street. Ugh, how depressing.

Anyway, I've gone on enough. Desperate Dan artist Jamie Smart's thoughts are always good to hear. Read what he has to say and I urge you to get the Dandy while you still can. At best we can save it, at worse you'll have a rare collectors edition for the future.