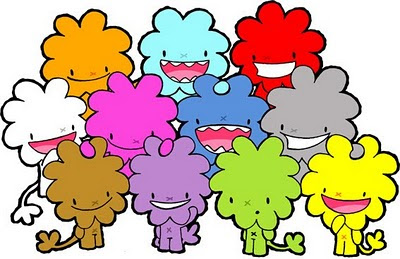 What an exciting week..! Well back to business: I found this image as I desperately archive stuff off my computer to conserve space and keep it working a few months longer. Don't worry I'm not going to start ranting again so please just enjoy the colours and relax....
Posted by Phil Corbett at 22:47 No comments:

Email ThisBlogThis!Share to TwitterShare to FacebookShare to Pinterest
Labels: lion 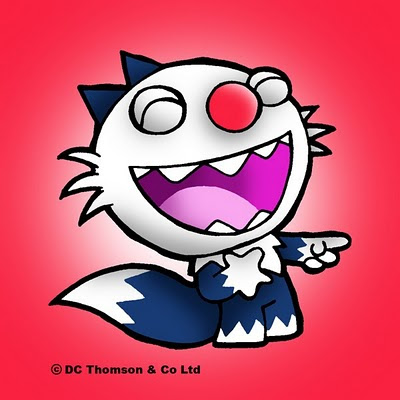 Today is D Day. Dandy day that is. I've been sitting on this for months but finally I can reveal my new Korky the Cat for today's Dandy relaunch.
Drawing Korky means a lot to me as I grew up on comics (although I must confess I was more of a Whizzer & Chips fan back in the day) and I had all the Dandy annuals from the 60s onwards from jumble sale hauls. Korky was always one of my favourites and who would ever have thought I would get to be working with him.
It's a real treat to be bringing back a character with such a history after his couple of years off - I believe he was away travelling - and hats of to the Dandy people for letting me change him so much. I think he's the oldest ever continuously printed comic character or something like that (citation needed) so it's down to you to keep him going. Get out and buy the Dandy today!
Posted by Phil Corbett at 08:22 2 comments: 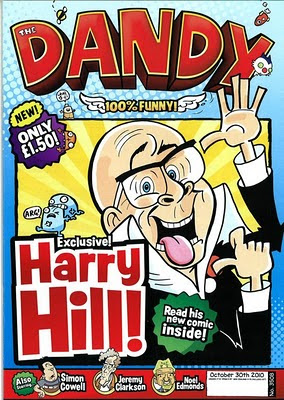 Get ye down to your news agent's tomorrow and buy this copy of The Dandy. It's relaunching as a proper comic full of cartoon strips again, just like it used to be.
But who is that peeping out from behind the Y of Dandy? Why it's one of the oldest, yet still going characters ever: Korky the Cat.
It's quite an honour to be putting words into the mouth and drawing such a venerable character & hats off for the Dandy for letting me change him so much. He's now a lot shorter and blue, rather than black. He still has his trademark big red nose, green eyes and furry belly. I've made him generally fuzzier all over too - I think he must have some persian in him.
So it just remains for you lot to buy this comic tomorrow and together we can usher in a new golden age of British comics.
Posted by Phil Corbett at 16:17 1 comment:

I think it's OK for me to post about this now. As long as I don't say specifically what it was for I'm not breaching my contract so I think I'll be alright.
Well here is a load of work I did for a pitch over a year ago. When I went in to give my presentation they were amazed by the amount of work I did for it. It was just me and not an agency by the way.
Well I say just me... I got some brilliant friends to help out. Have a close up look at the plush and the sculpt. They were made by Caitlin & Holly and they were ace. There was also some ace animations in both the third dimension by Seed Animation and the second by Big Man Designs. Lucky I know such ace people. And look: Here I am about to wax lyrical about my ideas.... 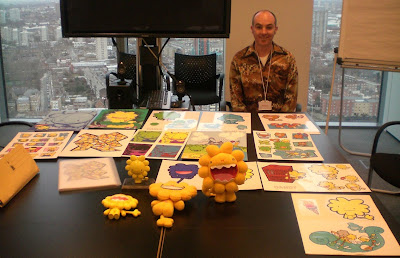 What a professional! But I didn't get it. I made it through to the final selection but in the end the tender was given to an agency which created two committee designed horrors. I was thinking about this earlier as I saw the hideous plushes in the shops and had a pang of bitterness and disbelief at the state of them. How was that ever allowed? Oh well, onwards & upwards. One day I'll be a mover & a shaker.
Posted by Phil Corbett at 21:11 No comments: 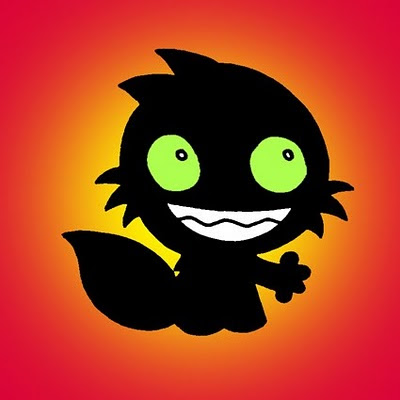 The UK's oldest comic, The Dandy is being relaunched on Wednesday and I'm involved with a couple of strips. Exciting times indeed. I hope it does well as comics seem so thin on the ground these days and they were a massive part of my life when I was growing up and made me the artist I am today.
Here's a little teaser of one of the characters I've been working on. Get down to your newsagent's on Wednesday and buy yourself a copy to follow his adventures. Together we can make comics massive again!
Posted by Phil Corbett at 13:11 No comments:

Email ThisBlogThis!Share to TwitterShare to FacebookShare to Pinterest
Labels: Dandy 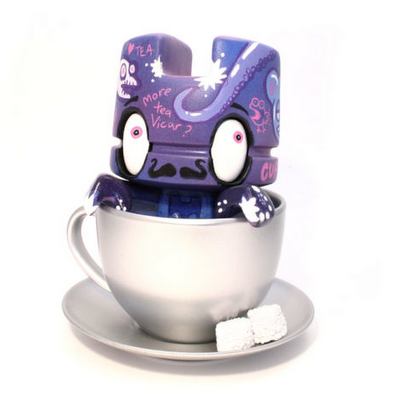 That Lunartik is the light of my light this week. Tonite, if you're in London you must go to the Kid Robot shop (it's only a store in America). The customs Teas that have been all over the place are ending up here this evening. He'll be there along with loads of other artists so pop along and say hello. If you like the customs you see there, why not buy one. They're up on ebay so try and it's all for chari-tea, the NSPCC so bid crazy. Please bid for mine too as it'll be awful if no one does, both for the poor children and for me personally.
Posted by Phil Corbett at 13:38 No comments: 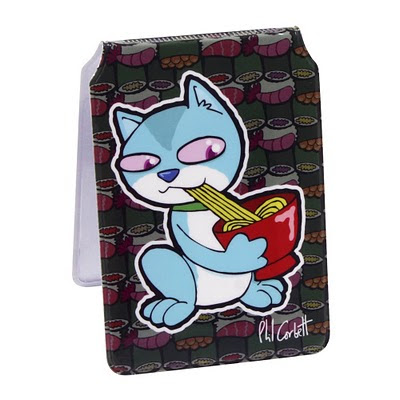 Do you hate promoting random companies when you're scanning your Oyster card on London Transport? Well those days are well & truly over. My old chum Matt Jones aka Lunartik has addressed this problem with a series of lovingly designed card holders which go on sale in Forbidden Planet this weekend.
But it's not just his designs you can get your hands on, there are more amazing artists in the series: Triclops, Pete Fowler, Ian Stevenson, Sichi, Toaster & (in my humble opinon, the best of the bunch) myself have all done a design for him. So get down to the Forbidden Planet shop and buy one or come straight to me, if you want my design and I'm sure we can come to some mutually beneficial arrangement.
Posted by Phil Corbett at 10:07 No comments: 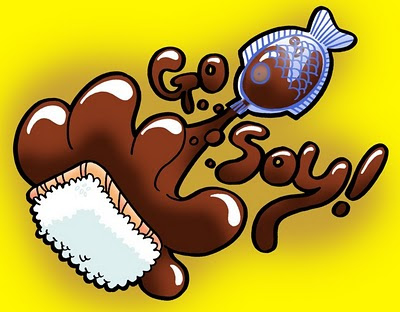 Those little plastic fish full of soy you get in Japanese take-aways always amuse me. I thought I'd draw one. I think this piece fully demonstrates my lack of understanding of basic perspective once more. It's not my fault - I'm a big fan of pre-Renaissance art.
Posted by Phil Corbett at 18:19 No comments: 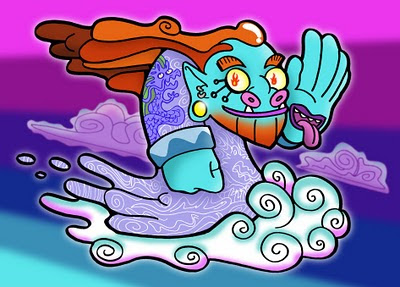 Hmmmm.... I'm not sure where this came from or even how to describe it. Maybe it's to do with too much sun so late in the year. But please enjoy it and try to accept it. I, as always, mean you no harm. I love you all.
Posted by Phil Corbett at 16:31 No comments: 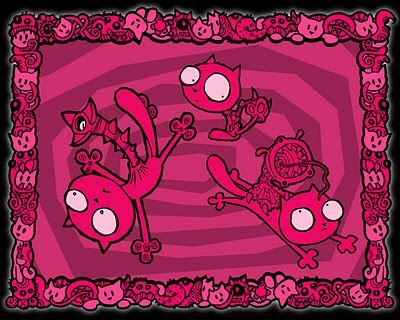 Seeing as today is National Poetry Day, I thought I'd do something poem related. As you may know I released an anthology of kitten & parasite poems a couple of years back. This was one of the wallpapers you could download from that site. I have since forgotten to renew the Kitten Parasite site and the real life parasites sitting their want $2000 dollars if I want it back. I don't really as you can get all your feline suffering poetry here at the Kitten Parasite Blog.
Yay for poetry and the Nation!
Posted by Phil Corbett at 18:14 No comments: 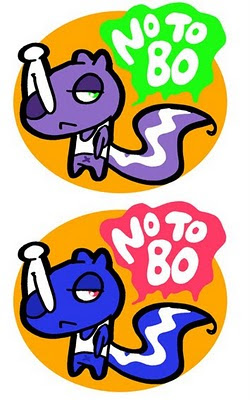 You stink - I just thought I'd tell you. Of course I'm only kidding. Your aroma is delightful and I love you. Not like this stinky skunks though - They're ripe!
Posted by Phil Corbett at 13:03 No comments: